How much coffee did you drink today?

We host the Coffee-by-Coffee project, with its dynamic pop-up shop stall 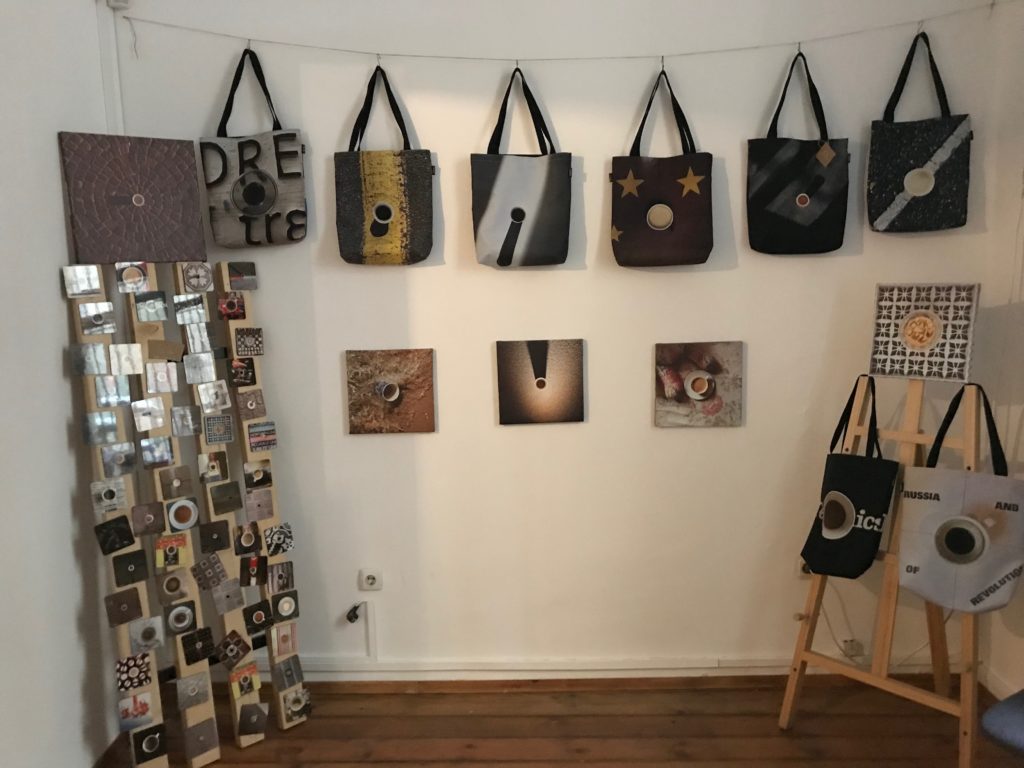 How much coffee did you drink today?

That’s more than 2 billion cups, manufactured from natural resources, at the expense of nature.

In return for 2 to 20 minutes of enjoyment. Two or three times a day.

Resulting in the disposal of something which does not degrade, isn’t recycled, and remains on Earth for about 200 years.

All for something, which we can easily consume in a non-disposable cup. 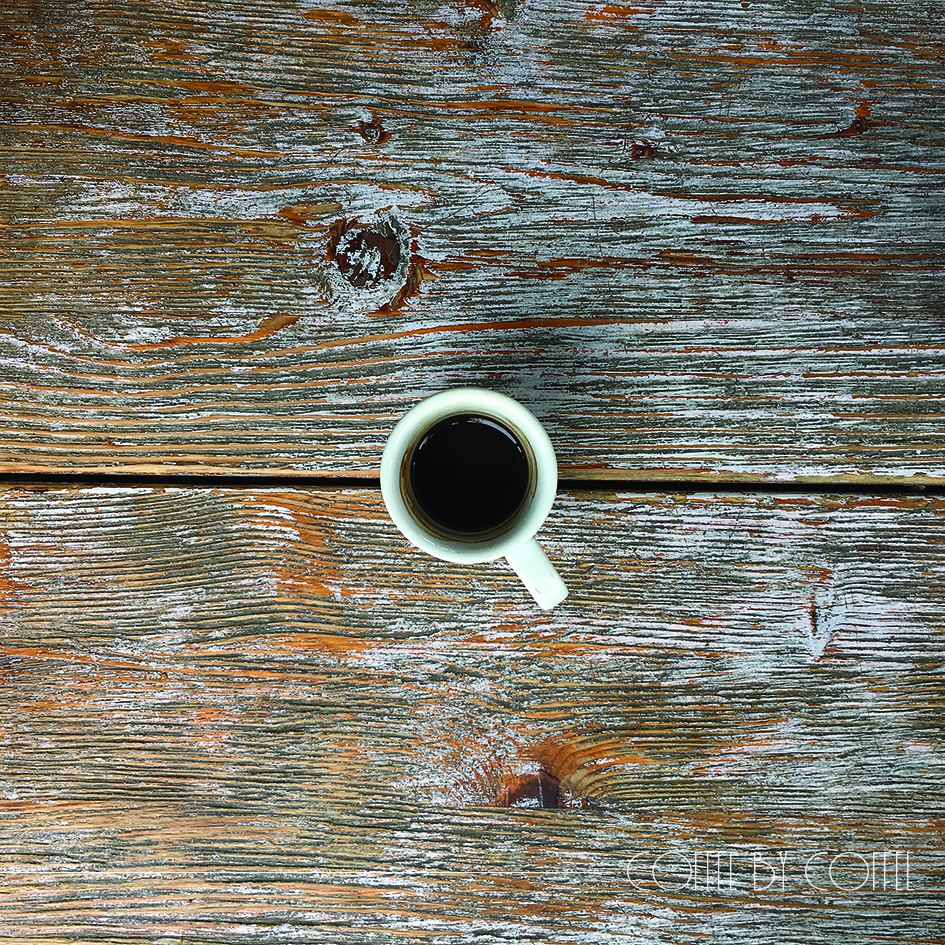 Coffee cups are rarely recycled, and Bulgaria is no exception to that rule.

Complex technology is necessary for the process, given that they often hold traces of the drinks they held, or are coated with polymers, so as to not leak.

These are natural resources being expended, in return for garbage which pollutes our soil and forests. It also pollutes the Black Sea, the oceans, and the entire planet. And here we’re not even counting coffee capsules, straws, lids, stirrers, holders, and everything else associated. 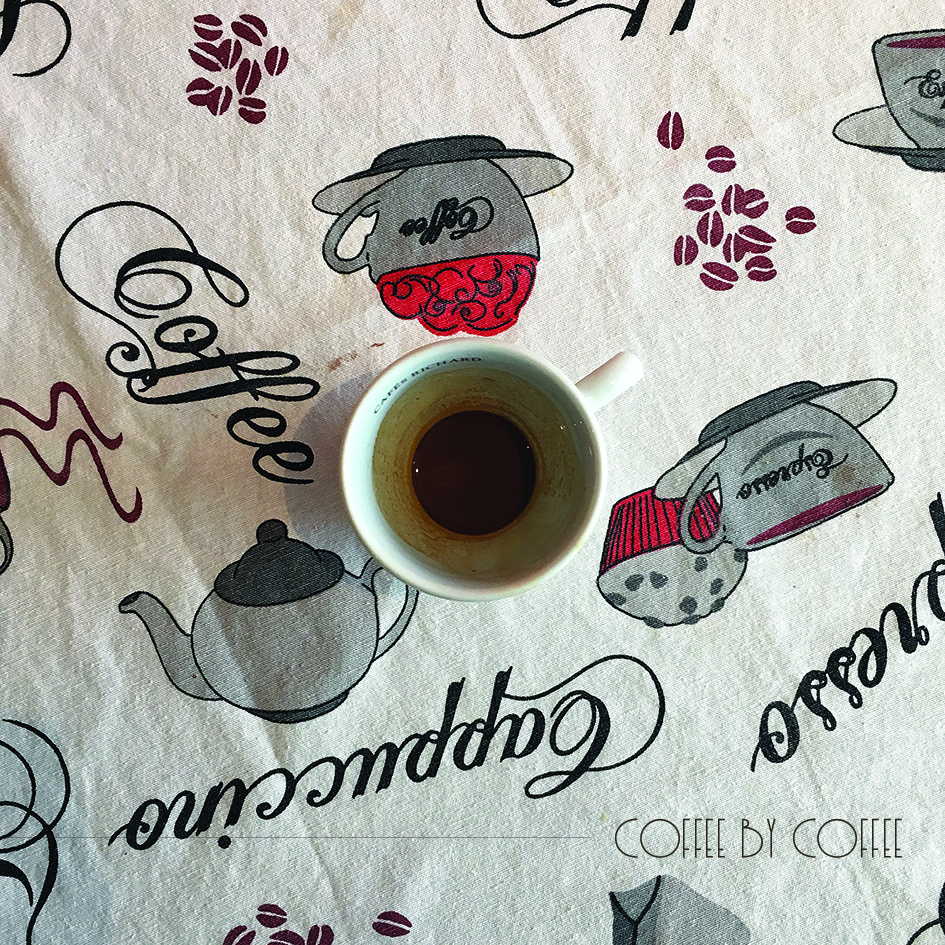 Besides the natural footprint, coffee can be referred to as “black gold”.

In fact, it is the second most traded commodity after crude oil. The effort of people growing it, who live in third world countries or impoverished communities, is often rewarded with less than 1 US dollar per day.

Do you know where your coffee comes from, or in what conditions it was grown?

And you drink around 680 cups of it every year.

Coffee-by-coffee is the documentary project of photographer Nikolay Stoykov, who has taken a picture of every single coffee he has drunk, since 2016. With this endeavour, he aims to provoke coffee lovers: One or two coffees a day. Is that a lot? On Coffee-by-coffee’s Instagram profile, Nikolay shows us just how much that is. A collection of more than 1000 cups of coffee, makes us think about our own footprint. 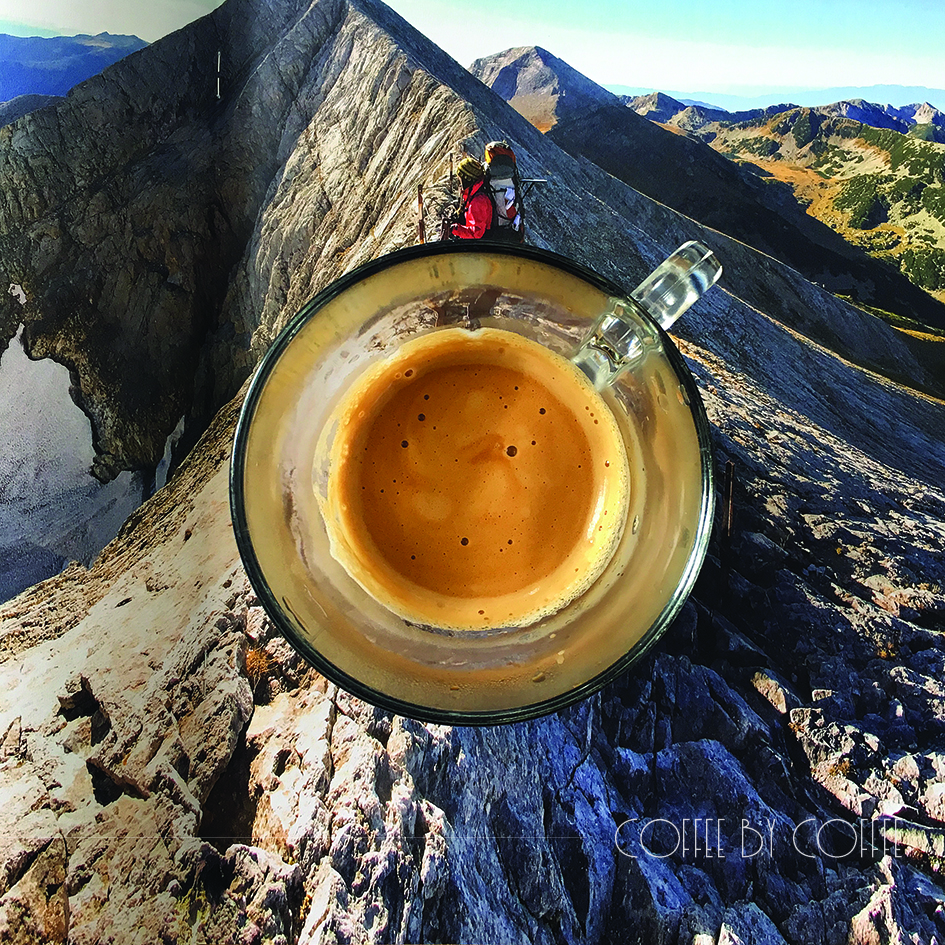 Niki is part of the Motif team whom, together with Cush.be, have started a campaign to promote the reduction of usage of disposable cups, and to inform the public about where coffee comes from. They are inspired by the fact that there is only one planet Earth, there are many of us, and our footprint is seemingly infinite. Together, they embraced the initiative to keep the enjoyment of coffee as part of our daily lives, but not as a reason for the destruction of nature, or the proliferation of modern-day slavery.

The pop-up stall, located at MOVE.BG’s space on 20 Serdica st., offers pictures, t-shirts, bags, special Coffee-by-Coffee coasters, and an overarching message as to why we should stop drinking our coffee in disposable containers. 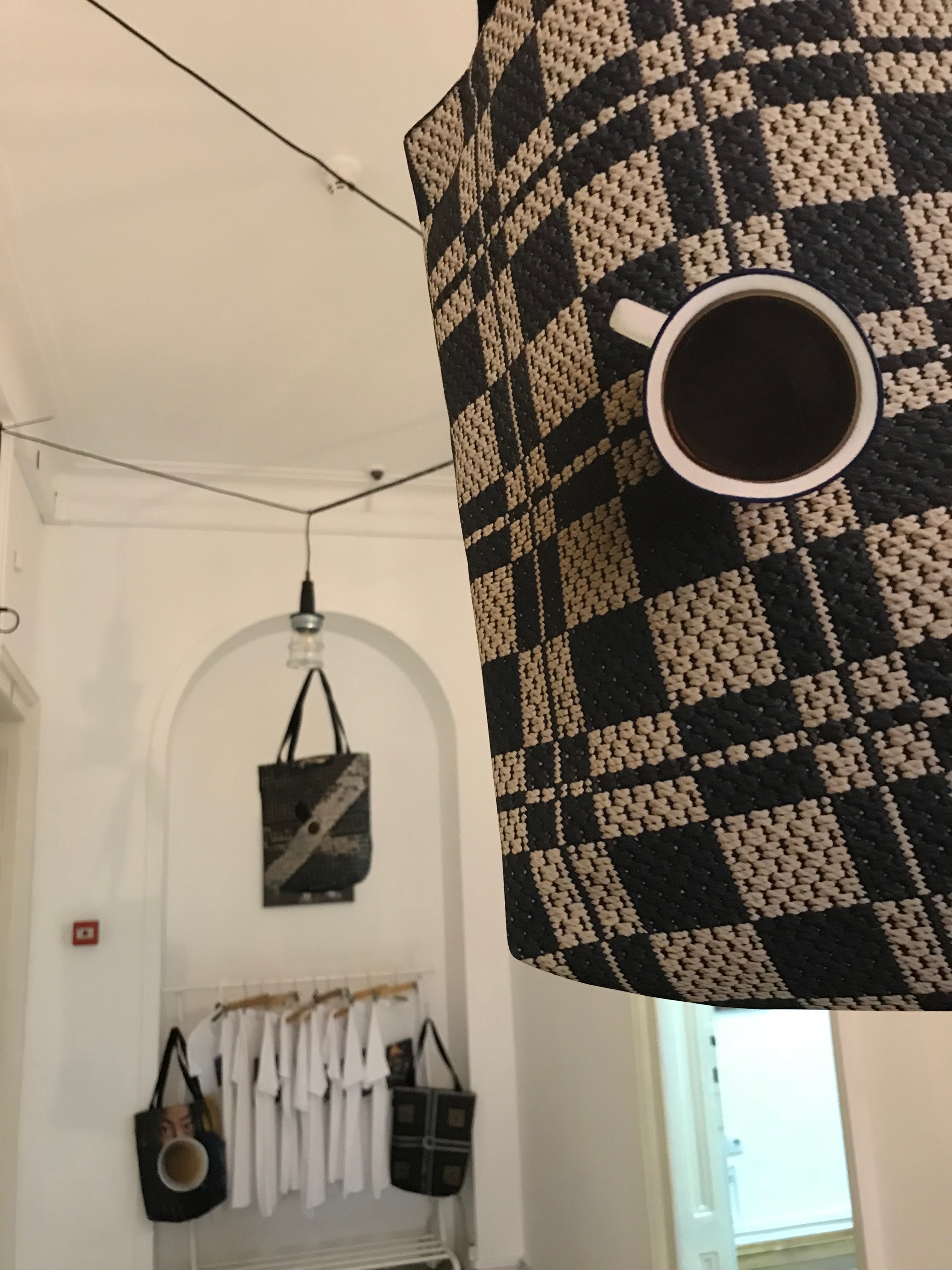 The bag prints are part of a limited run, as each one is adorned with a unique photo, meaning no two people will have the same bag.

The store is also dynamic, with our guests often adding new items, with the idea of reaching more people, and turning them into ambassadors for the cause. Coffee-by-coffee will be at MOVE.BG’s space for the next three weeks, so if you want to have a chat and browse the stall, come and have a wafer cup coffee with us.

For the stall’s opening event, held on June 12th, special guests included the people behind surfing initiative WIND2WIN, members of Zazemiata.org’s team, who are well aware of the dangers single-use containers and wrappers pose, active participants behind the Plastic Free Coffee Lovers initiative, as well as ecologist and anti-consumerist Asen Nenov, who spoke about the dangers of uncritical and uninformed buying practices. The discussion revolved around the different facets of pollution, the reasons for today’s status quo and how that harms not only nature, but humanity as well, and why each and every one of us is responsible for the reduction of generated garbage. 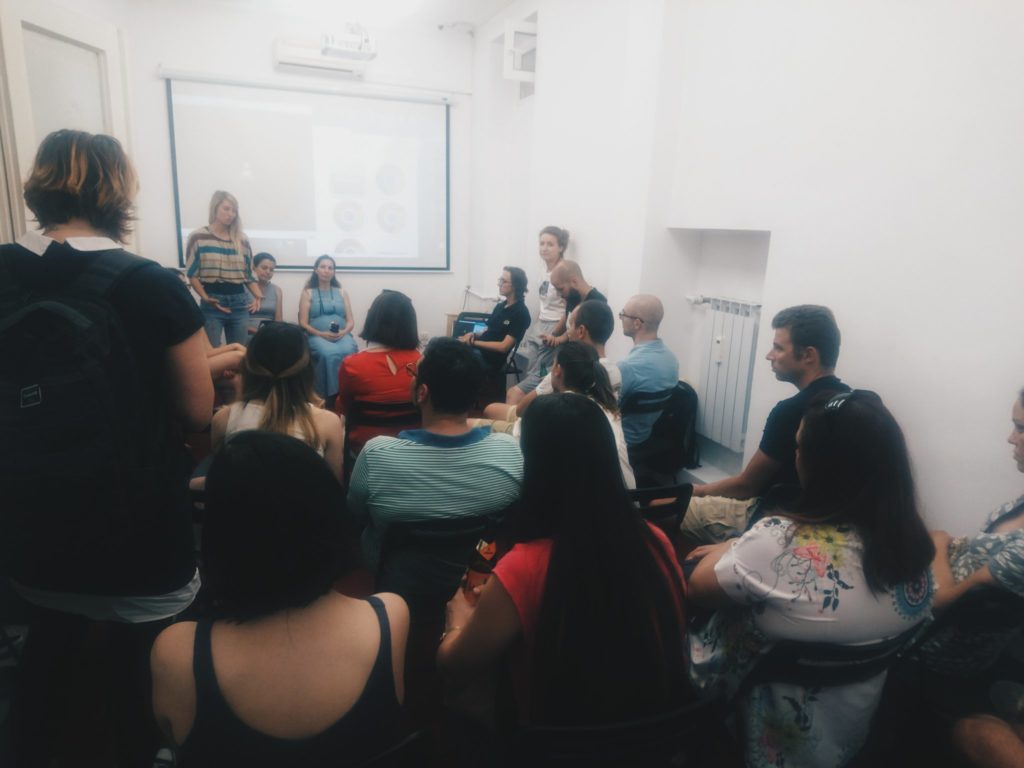 Our message is clear. Coffee-by-coffee makes its mark. Wake up for a change!

Translated in English by Plamen Dobrev