MOVE.BG Celebrates with the Good Examples that Drive Bulgaria Forward

Among a number of valuable suggestions from our partners, we chose to honour the most inspiring ideas and projects that our team felt closest to the fundamental values of MoveBG. 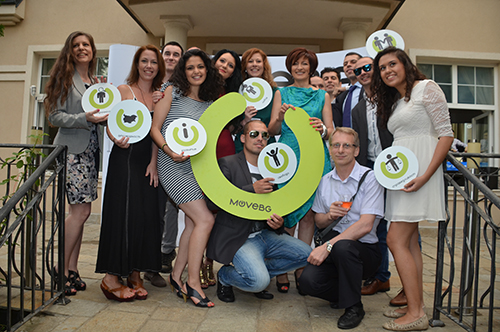 In search of the good examples that drive Bulgaria forward, we were supported by Foundation 42, Teach for Bulgaria, EDNO, National Youth Forum, TimeHeroes, Tuk-Tam Association, Back2BG, Pink Glasses volunteer group, United Ideas for Bulgaria, National Children’s Network, Ideas Factory and GLOW Leadership Academy, among others. Among a number of valuable suggestions from our partners, we chose to honour the most inspiring ideas and projects that our team felt closest to the fundamental values of MOVE.BG.

The causes that received honours at the first birthday of MOVE.BG:

MOVE.BG’s favour in the Freedom category went to an organization which, for the past four years, has been working for the education of a free Bulgarian people by facilitating the access to knowledge. For the educated person is a free person. This organization recently celebrated its fourth birthday. Her latest project gives the former inmates of children's homes the opportunity to learn a trade and find a career to prepare for the independent lives of adults. Until now, the members of this organization have passed on to children's homes more than 7000 books in donations. In the Freedom category MOVE.BG awarded the representative of the Give a Book Foundation, Elena Marinova. The certificate of excellence was bestowed by Ivan Bondokov, who is responsible for national network MOVE.BG. 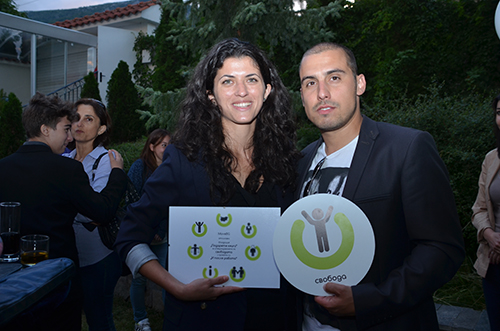 Elena Marinova, Give a Book Foundation, and Ivan Bondokov, MOVE.BG

Our evolvement as a society goes through recognizing the need for development – both of each of us as a separate individual and of our community. What allows us to evolve, are the opportunities we come across on our way. And what better opportunity than finding fulfilment in one’s own homeland and contribute to making Bulgaria a more successful and prosperous European country? For 7 years now the "Careers in Bulgaria. Why not?" forum has been dedicated to proving that the skills and knowledge of young Bulgarians are highly valued and needed here - in their homeland. For its contribution to the affirmation of development as a value, Back2BG and the Tuk-Tam Association were honoured by MOVE.BG. Selçuk Emin, Deputy Chairman of the Managing Board of the Tuk-Tam Association received a certificate from Elisar Bashir, head of the European Program of MOVE.BG. 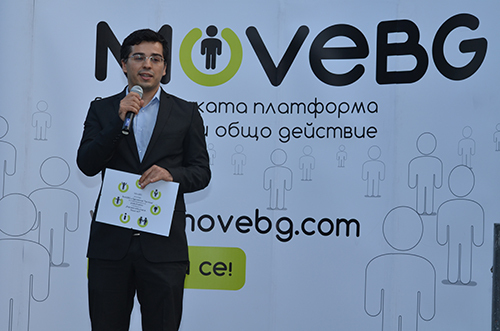 In the value Transparency category MOVE.BG distinguished a volunteer organization that, starting in 2009, has so far found new homes for nearly 3,000 stray dogs and cats in Sofia. Through numerous fundraising campaigns conducted in a minimal time-frame at the end of last year and a fully transparent mechanism, more than 210 thousand euros were raised to build a new animal shelter. MOVE.BG’s cause of choice of MOVE.BG in the Transparency category, Animal Rescue Sofia, was announced by Jordan Mihajlov, video shooting and processing expert at MOVE.BG. 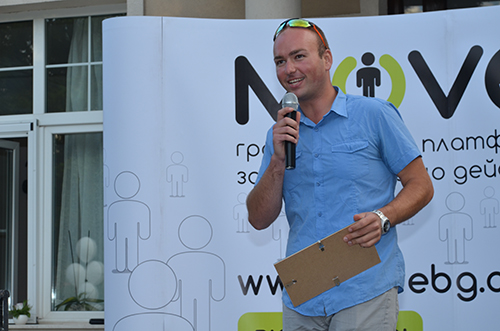 It is MOVE.BG’s firm belief that we are all responsible for our own future, and together we are responsible for the future of Bulgaria. This is why in the Responsibility category MOVE.BG chose a network of Bulgarian medical students in Germany and Britain. As "Treatment without Borders" they assist Bulgarian patients hospitalized abroad - with translation, administrative and moral support. Linda Petkova, expert in the Economic Program of MOVE.BG, awarded a certificate of excellence to the nominating organization, United ideas for Bulgaria, presented by Lachezar Radev. 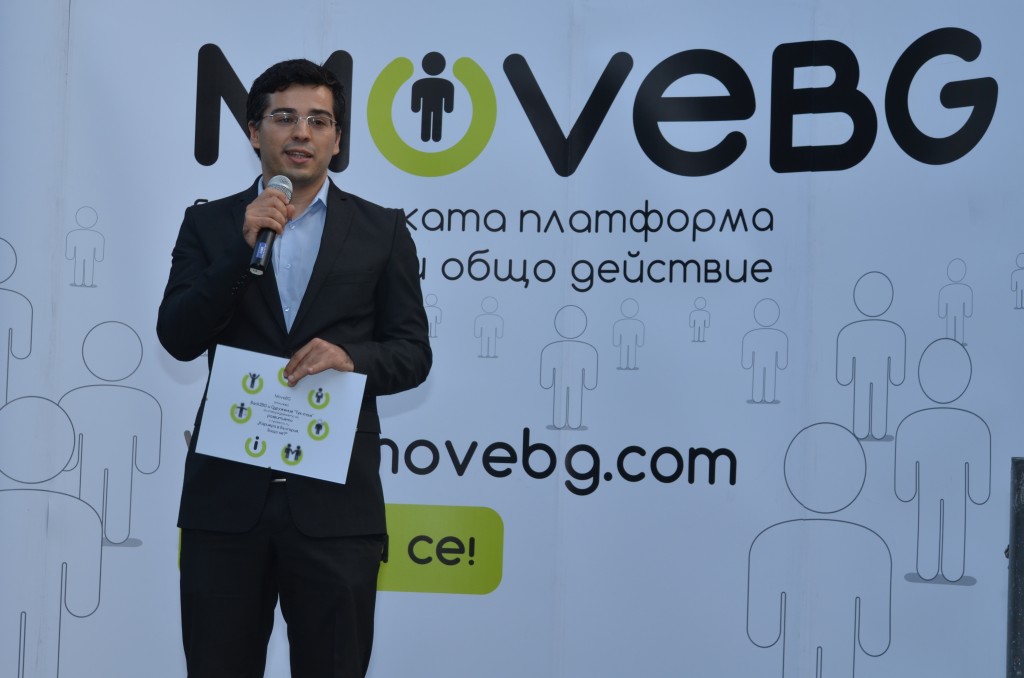 In the Justice category, Dimi Deyanski, graphic designer at MOVE.BG, awarded with a certificate of excellence the project of the Municipality of Plovdiv for an International Contest for the Central Square in the town of Plovdiv. The competition was part of the strategy of the Municipality of Plovdiv to prepare the city's bid for becoming a European Capital of Culture in 2019. It attracted 125 entries from 41 countries. The applications were reviewed by a multinational expert panel, whose work stood out with exemplary transparency and accountability. The distinction was received Dimitar Katsarski, Deputy Mayor of construction Plovdiv. 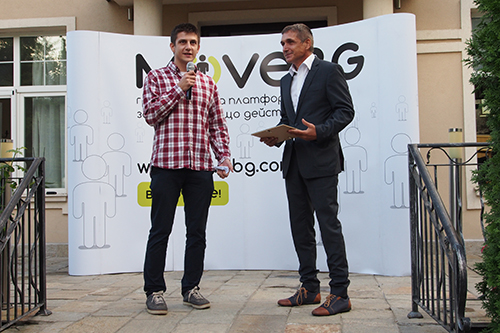 The distinguished cause in the Love category was presented by Nadejda Dermendjieva, Social Programs Officer at MOVE.BG. The team chose a project which proves that each of us can move Bulgaria in a positive way – the Idea in Action foundation. In its latest initiative, the Foundation harnesses in action plastic bottle tops that are recycled to finance the purchase of appliances for children's homes. So far nearly 2.5 tons of plastic caps have been collected. 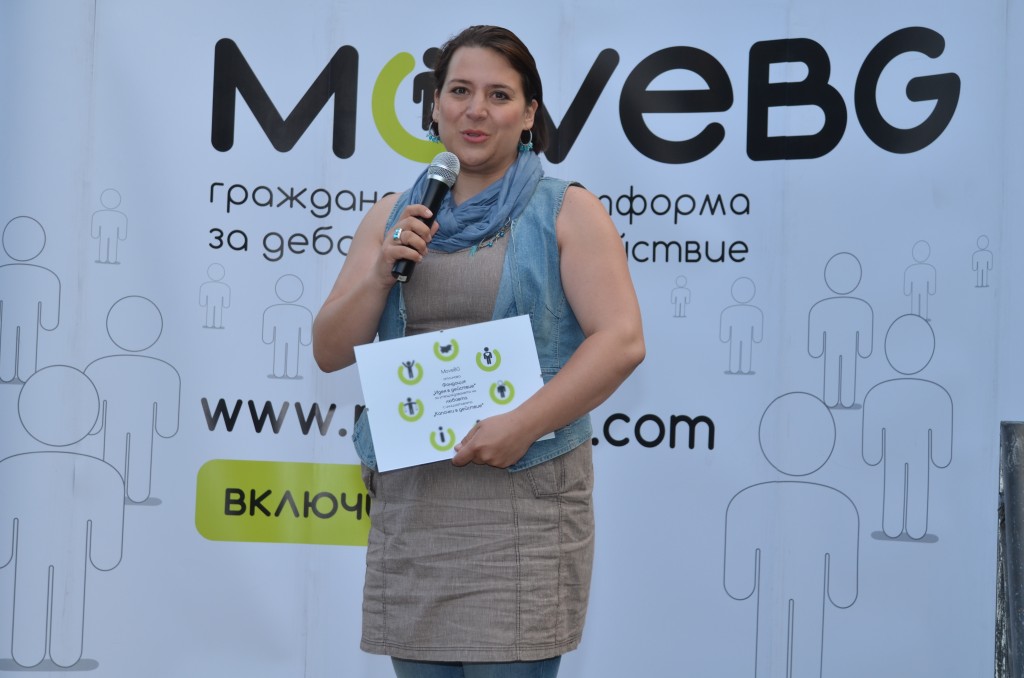 As the best example of the common action value, MOVE.BG chose to distinguish the team that prepared the application of Varna for European Youth Capital. Comprising representatives of local authorities and youth organizations, the team is an example of successful cooperation between state bodies and NGOs. Not only did it create a fresh and intriguing image for the sea capital of Bulgaria, but two times brought Varna to the finals of the European competition for the title of European Youth Capital. Dimo Gospodinov, Head of the Law Program MOVE.BG, bestowed the distinction to Liliya Elenkova from the National Youth Forum. 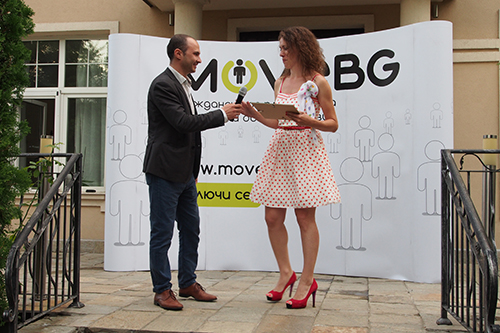 MOVE.BG would like to express its gratitude to its partners and congratulate all of the remarkable and worthy initiatives that were nominated for participation in the anniversary project. Although a total of seven certificates of excellence were awarded, as long as we see such bright and active personalities in action among ourselves, we will all be winners. Together we prove that Bulgaria can.

Thank you all for the good example!