One Minute for Media Freedom: What Did the People Tell Us?

We held discussions in 6 regional centers on the theme ‘Direct European Democracy in Action – European Citizens’ Initiative for Media Pluralism’ to emphasize the relationship of the initiative with this direct form of democracy in Europe. 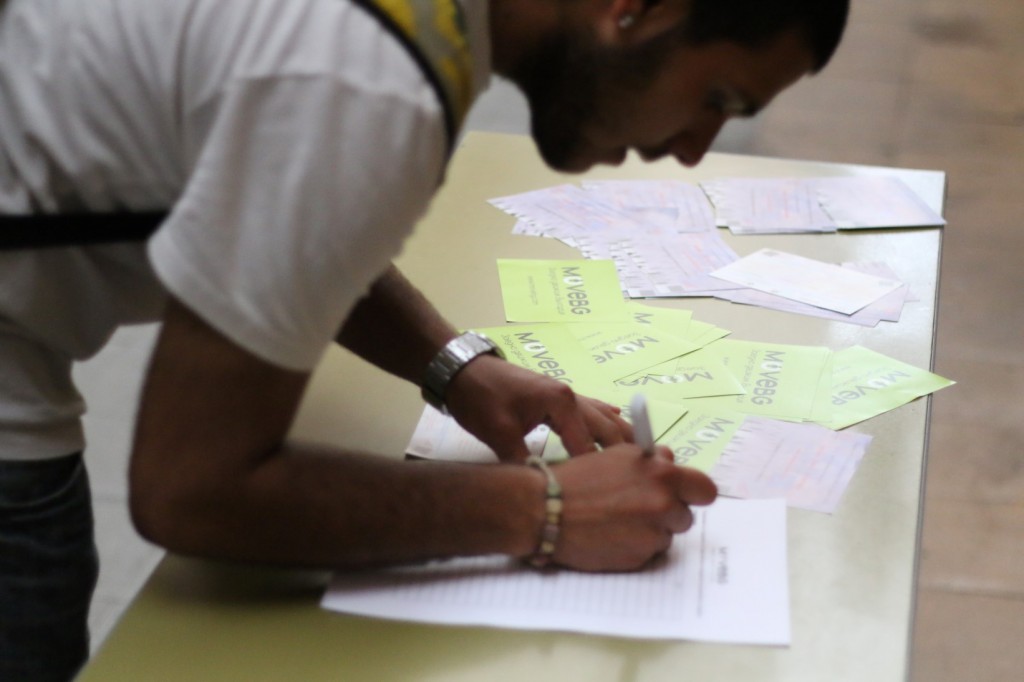 In the framework of the MOVE.BG campaign supporting the European Citizens Initiative for Media Pluralism and with the organization ‘Media Initiative BG,’ together we organized a tour of Bulgaria, in which our goal was to advertise the campaign, canvass for signatures, and gather comments from journalists, experts and active citizens related to the problems in the media environment where they live.

We held discussions in 6 regional centers on the theme ‘Direct European Democracy in Action – European Citizens’ Initiative for Media Pluralism’ to emphasize the relationship of the initiative with this direct form of democracy in Europe. From June 3rd to 8th we visited Plovdiv, Stara Zagora, Burgas, Varna, Ruse and Pleven in order.

The meetings were attended by people from different aspects of society – journalists, media experts, media owners, NGO representatives and other active citizens, in order to obtain the best possible picture of the problems facing the media sector at the regional level, not only by those working in this field, but for all users of media.

This kind of ‘tour for media freedom’ reveals interesting observations on the general characteristics of the problems in the media. When we are talking about the media, the general belief in each region in Bulgaria is that the media are not independent. But it’s not only that they aren’t independent, but also their relationship is tied to money and politics.  This, for which we are fighting with this initiative for, was reaffirmed by the people in the country: the observation is the same – it has even been accepted as natural – the fusion of media, politics and business.

Another interesting common theme on the media for the people in the country was that positive news was not covered sufficiently, but negative and scandalous news was given priority. In many of the meetings it was even proposed that a TV station be created to cover mainly positive news.

Values were a theme that appeared to be a unifying element for the different parts of Bulgaria. When comparing the views of the tour it turned out that most people had a key understanding that media is a vehicle for inherent social values. The media should not impose values on society, but should protect cultural heritage at the local and national level and have an educational role in shaping public opinion.

We can summarize the problems in three areas:

What needs to be changed?

In view of the comments from the country, we can conclude that the legal framework of the media is one of the main factors when it comes to ensuring media pluralism, according to most participants in the discussions. Opinions varied from developing more stringent media laws to the protection of the journalism profession.

In view of the comments received by the country, we can conclude that the legal framework is one of the main factors when it comes to ensuring media pluralism, according to most participants in the discussions. The last proposal from posts from Burgas however would create additional penalties for the misuse of office. In almost all cities in was concluded that the media should be registered and licensed, also journalists, MPs and senior government officials and their relatives should not be entitled to hold media, and Europe should establish a national and European television monitoring system for the media.

Other major reservations when it came to media coverage relates to the priority of news coverage, from police reports to more positive news, as well as the dominance of the mayor’s authority as an institution – coming from a post from Ruse. To solve the second problem, it was proposed to regulate the role of the state / municipality as a key advertiser in the media, through the creation of new media laws. Currently Bulgaria legally only regulates the activities of radio and television, but the journalism profession does not require a license and there are no tools to ensure the accuracy of information from hundreds of newspapers and news websites. Currently there are no such requirements in any EU directive.

What are the conclusions of the analysis?

An analysis of our tour shows and proves that the media environment has become seriously polluted in Bulgaria in recent years. The professional etiquette in the media is like ‘the watchdog,’ where they long ago lost they’re purpose, namely, to hold accountable the authorities and to follow their activities, in the name and interest of the public. If today we had to use this term, it would be more appropriate in correlation with the word ‘bat’ – the media today are mostly servants of special interests, which in no way could be considered ‘public.’  They use their influence, enhanced by the emergence of new forms of information transfer, to draw attention and opinions to where they were commissioned. The illusion of independent media is a common topic around this theme, but we can safely say that today the media are increasingly opaque, controlled, biased and dependent. The super saturation of information channels that were generated after the expansion of the Internet and social networks has led to a deprofessionalization in the industry and to an overflow in questionable ‘truths’ that make people skeptical of the news and wary of all news that is available.

The upcoming seventh meeting in Sofia can verify or refute these claims. A brief analysis from the country will give an additional reference point from which participants from Sofia can discuss.